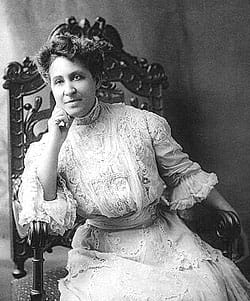 Mary Church Terrell (1863–1954) was a prominent activist and teacher who fought for women’s suffrage and racial equality. After her friend Thomas Moss was lynched, she became involved in Ida B. Wells’ anti-lynching campaigns. Her activism was largely centered on the idea of “racial uplift,” and her words, “lifting as we climb,” became the motto of the National Association of Colored Women’s Clubs (NACWC, which she helped co-found in 1896). She was one of the founders of the National Association for the Advancement of Colored People (NAACP) and a co-founder of the College Alumnae Club. In 1948, she became the first Black member of the American Association of University Women after winning an anti-discrimination lawsuit.