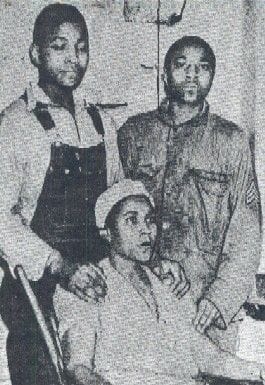 Rosa Lee Ingram was a Black sharecropper who, during November 1947, was assaulted and sexually threatened by her white neighbor, John Stratford. As she fought off Stratford, her two sons, Wallace Ingram and Sammie Lee Ingram, came to her defense. Stratford died from blows on the head, and the Ingrams were given the death penalty. Due to protests led by Sojourners for Truth and Justice, as well as advocacy from the National Committee to Free the Ingram Family, their sentence was commuted to life in prison. The Ingrams were released on parole in 1959. The case highlighted the specific forms of oppression that poor Black women experience, as well as the need for Black feminism.