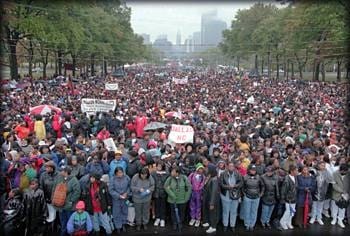 On October 25, 1997, approximately 750,000 Black women gathered to march in Philadelphia as part of the Million Woman March, an event centered on unifying Black women and giving them space to voice their concerns. The march was organized by two grassroots activists in Philadelphia: Phile Chionesu and Asia Coney. The Million Woman March, which did not rely on promotion from the leading icons of the civil-rights movement, became one of the largest gatherings of women across the globe.